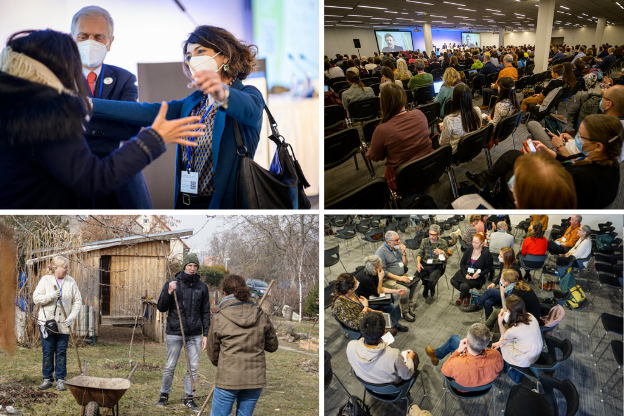 A world conference in Prague despite the refugee wave? Yes, we can. Yes, we care

The 11th World Environmental Education Congress was celebrated as planned at the Prague Congress Center despite the venue being partially used to host Ukrainian refugees.

A few weeks before the conference, the Czech Government decided to host some Ukrainian refugees in the big hall of the congress centre. Some other congress centre clients decided to cancel their planned events, but WEEC made the brave decision and confirmed the event.

Lenka lebková, CEO of the Prague Congress Centre explained: “We believe that we are able to meet not only humanitarian but also our business needs. One way to offer support to those impacted and the rest of the Czech Republic, as well as Europe as a whole, is to go through with planned event. We are very grateful to the organizers of the World Environmental Education Congress, who saw this as an opportunity.”

Actually, the congress centre was split into two separate parts: the hall and ground floor were dedicated to refugees and the second and third floor, with a separate entrance was used for the congress delegates.

“It was a brave decision, in some ways, because due to the official state of emergency the government could have cancelled the event from one day to another, so we planned several backup solutions” explains Elena Alexandrová, Head of the Congress Department at AIM Prague. “For instance, we asked other venues in the city if they had availability to host the conference.   Since the event was a hybrid format we had the advantage of being potentially able to transform it into a fully virtual event in worst case scenario”.

The strong collaboration with the Prague Congress Centre guaranteed that the conference was  comfortable for delegates. Of course, delegates were advised in advance about the situation and reassured about their safety in Prague, which is 1.000 km away from Kyiv, the same distance as Berlin to Vienna.

The 5-day conference was comprised of two parts: the first three days were held at the congress centre and the last two days were spent outside on field programs. The field events took place in Czech environmental education centres and selected nature sites. A real value add for the delegates was that they could exchange practical experiences and network whilst exploring the host country. These visits were structured around case studies on particular topics followed by workshop-style sessions. Participants had opportunities to visit landscapes, landmarks and tastes of the so-called Bohemian Paradise: Moravian karst, Krkonoše mountains, Brno and the Bohemian – Moravian highland, leveraging the potential of in-person events with a touch of local culture.

An important part of the event was the Youth Environmental Education Congress, which brought together nearly 150 pupils and students to Prague to discuss the changing environmental education from their perspective.

“Hybrid was a must for a few reasons:  covid restraints, delegate’s personal preferences and also to accommodate an eventual emergency situation. Of course everyone usually prefers to meet in person, if at all possible. We know from this experience that we are totally ready for more events in Central and East Europe” adds Elena.

Finally, the congress was successfully organised without any problem. Our client, the Masaryk University of Brno, is really satisfied with the results, despite the many difficulties that had to be overcome, and is willing to consider not only a cooperation with AIM for future already planned events but to define together new projects, ideas and events.