How to foster engagement among digital and in-person attendees 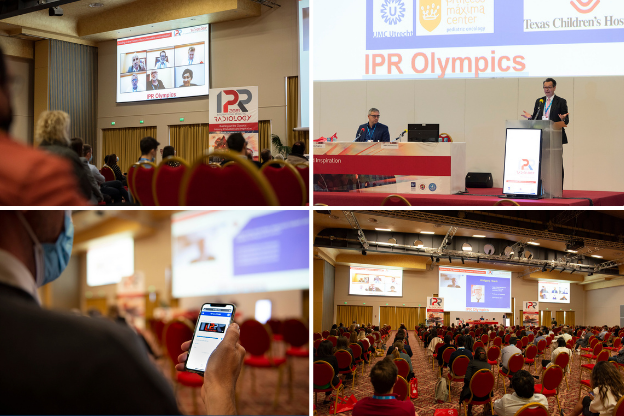 Clients: IPR - International Congress of Pediatric Radiology
Location: Rome + online
Solution: Conference Management (PCO) / Virtual, Digital & Hybrid Events
One of the main challenges for hybrid congress is to establish a concrete collaboration among both the digital and in-person participants. The IPR Olympics was a special feature which helped connect North-American and European radiologists in a truly engaging wa
CLIENT CHALLENGE

The 2021 edition of the International Congress of Pediatric Radiology (IPR) was held as a hybrid format from 10th to 15th October 2021 in Rome and online. The congress is held every five years alternating between Europe and North America. There were 220 speakers of which 100 were connected remotely. It gathered 350 people in Rome and 650 participants online: so, a truly hybrid audience was engaged at the same time. The challenge IPR would like to face was how to connect the two audiences and create a real, concrete collaboration among digital and in-person attendees: making the event interactive, engaging and productive, able to foster the knowledge sharing of scientific content.

To facilitate the collaboration and active engagement of both the online and onsite audiences, it was decided to organise a ‘special’ hybrid scientific session, the IPR Olympics, a competition about the most important and updated studies and findings in the sector.

The teams were comprised of 6 people chosen from the speaker faculty. The teams met not only in person but also online: all the team members connected from their pc (from a separate room at the congress center in Rome or from remote) and were projected on two big screens in the plenary room.

A quiz master moderated the game, based on multiple choice questions, most of them on the scientific content related to the congress but it also included some cultural questions about the hosting city, Rome. The audience in the plenary room and online were asked the same questions of the competing teams and must answer before the answers were revealed, then all the answers were compared and commented, originating interesting discussion.

This engaging format, conducted with an informal and spontaneous style, resulted in active participation and was really appreciated because it encouraged interaction and fun, while stimulating discussions about important scientific content.

All the scientific sessions were uploaded on the congress website and are available on demand until next year, extending the duration of the congress and the possibility for other people to access the content.

The client was really satisfied with the results and very happy to be able to organize the event in-person, while fostering the engagement of both digital and onsite delegates. The Congress Presidents, Andrea Rossi & Damien Grattan-Smith, commented: “Everything was just flawless. The room was as full as could be under the circumstances, and the audience reacted enthusiastically and with real participation… Our IPR Congress would not have been the same without you”.